Shelling in Idlib wounds at least 75 people, according to the Syrian Observatory for Human Rights

Government rocket attacks targeting camps for displaced people in rebel-held Idlib province killed at least 10 civilians and wounded more than 77 on Sunday, according to rights groups.

The crowded area of the camps in northern Syria was targeted at around 7am by cluster bombs believed to have been launched from the government’s Nairab airport, in eastern Aleppo province, the France-based Syrian Network for Human Rights (SNHR) told Middle East Eye.

A Russian reconnaissance plane was circling over the area, they added.

“About 12 civilians are in very serious condition, so the death toll could increase. The attack destroyed about 45 tents and partially damaged about 90, and more than 2,500 people have been displaced so far,” Fadel Abdel Ghani, chairman of the SNHR, told MEE.

“Our initial investigations indicate that this was a joint attack between Syrian and Russian forces. Each missile carried dozens of cluster bombs, making this a war crime,” he added.

The area around the camps was targeted by four Russian air strikes after the initial attack, while the western and southern outskirts of Idlib were targeted by government missile attacks, which resulted in the death of a civilian, according to local sources.

Idlib province is controlled by Hayat Tahrir al-Sham (HTS), the former arm of al-Qaeda in Syria. Local sources indicated that the group’s military headquarters may be located near the areas of the camps that were attacked.

HTS bombed areas under the control of government forces to the west and south of Idlib in response to the camp attack. The government’s Sana news agency said that the group’s attacks wounded a child and damaged civilian property.

The attack came a day after the Russian Ministry of Defence claimed that HTS was preparing a drone attack on the Russian Hmeimim military air base, which is located in the city of Latakia on the Mediterranean Sea, in southwestern Idlib province. 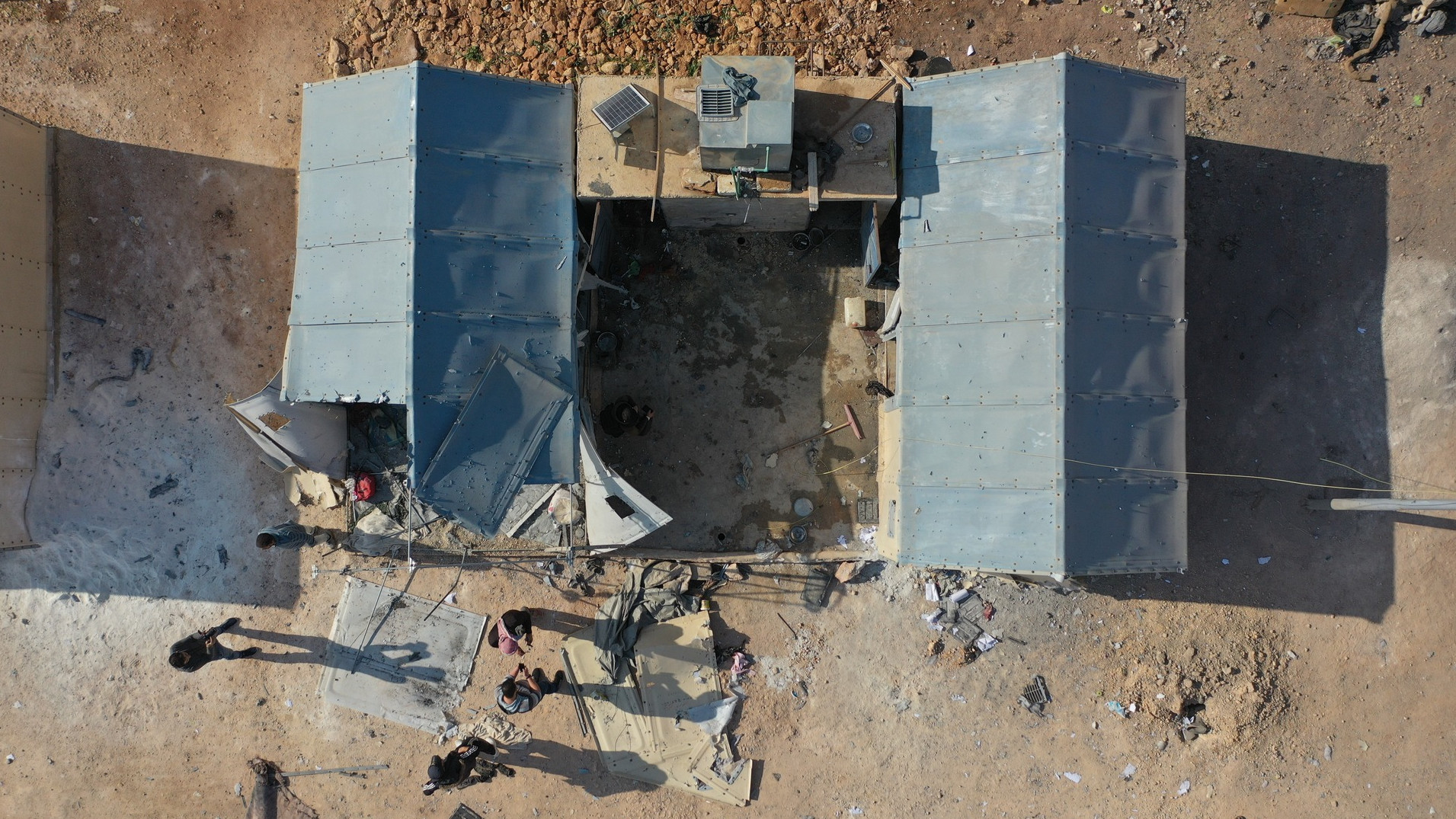 Russian Reconciliation Center for Syria deputy head Major General Oleg Yegorov, based in Hmeimim, claimed yesterday that HTS and the Syrian Civil Defence intended to fabricate and film attacks against the displaced in Idlib to accuse Syria and Russia of attacking civilian facilities.

In response, the Civil Defence Group said on Sunday that Russia had for years pursued a policy of media disinformation and fabrication, accusing it of carrying out systematic disinformation campaigns before its attacks, trying to divert attention from its crimes and misguiding the public.

Dozens of activists and citizen journalists published videos and pictures on Sunday of the destruction in the displacement camps, as well as pictures of dozens of wounded in nearby hospitals.

“Russia portrays its operations in Syria as a prominent success story and aims to send a message to the Russian community that it is a great power, that it is a victorious and influential party in this world – to cover for its losses in Ukraine,” Abdul Ghani told MEE.

He added that Russian and Syrian attacks in northern Syria have killed around 51 civilians, including 22 children and five women, since the beginning of this year.

About four million civilians live in Idlib province, half of them displaced from surrounding areas as a result of previous government military operations. These have slowed up since a 2020 ceasefire agreement between Russia and Turkey, which support opposing sides in the conflict.

Syrian President Bashar al-Assad issued directives last month to facilitate the return of displaced civilians, to the Maarat al-Numan area south of Idlib, even though Russian and Syrian military attacks have destroyed most of their homes and villages.

The state governor of Idlib recently claimed that 1,600 displaced families had returned to Maarat al-Numan.

Since the beginning of the Syrian war in 2011, about 250,000 civilians have been killed, with some 14 million people displaced from their homes, according to the SNHR.

Saudi Crown Prince will be ‘one of most important leaders of his time’: Pompeo