Israeli Prime Minister Benjamin Netanyahu’s eldest son Yair has once again been forced to apologize for an untoward tweet, after he shared a meme of the Hindu goddess Durga making a rude gesture.

In the meme, the face of Liat Ben Ari, the prosecutor in one of his father’s ongoing corruption cases, has been superimposed on the body of the multi-armed Hindu goddess of war.

The goddess’ many arms were photoshopped to flip the bird, while Attorney General Avichai Mandelbit’s face was placed on a tiger at her feet, alongside a caption that read “Know your place you despicable people.” 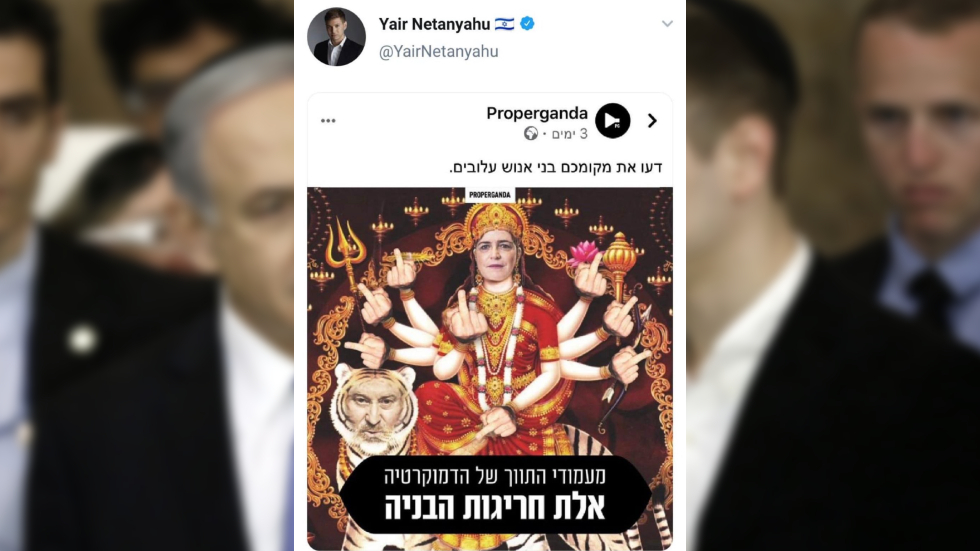 “I’ve tweeted a meme from a satirical page, criticizing political figures in Israel. I didn’t realize the meme also portrayed an image connected to the majestic Hindu faith. As soon as I realised it from comments of our Indian friends, I have removed the tweet. I apologize,” Netanyahu said, before tweeting a pandering nationalist slogan used throughout India.

Ben Ari is the presiding judge in the case against Netanyahu senior, who stands accused of fraud, breach of trust and accepting bribes. The Israeli prime minister would likely have been vexed by his son’s nonchalant social media posts, as he has made strengthening ties with India one of his top foreign-policy priorities.

Yair, who is Netanyahu’s eldest son, has become known for repeated, high-profile social media gaffes in recent years. Some of his noted controversies include insinuating that a top TV news anchor had slept her way to the top, as well as shaming a female supporter of his father’s political rival Benny Gantz.

He also called a police chief autistic, claimed the Knesset speaker was plotting a coup and has been embroiled in multiple libel suits, both as a plaintiff and a defendant.