Compared to four years ago, Zakat funds increased in record numbers last year, helping more than two million refugees across the world, according to UNHCR.

The latest Islamic Philanthropy report of the UNHCR has shown that Islamic Zakat donations in 2020 saw a big increase compared to previous years, amounting to $61.5 million, reaching more than two million displaced people across the world.

Compared to the period of 2016-2018, when Islamic donations had reached more than 34,000 people, last year, both Zakat and Sadaqah, along with Sadaqah Jariyah, which are other forms of religious donations, helped nearly 2.1 million people in total.

Zakat is a religious obligation, a kind of tax, as important as prayer, according to Islam. Muslims who meet essential financial criteria for their wealth need to donate 2.5 percent of their savings to charity as Zakat.

“Zakat donations increased by 12.5% in 2020 in comparison to 2019, triggering a much higher increase in the number of Zakat beneficiaries, which grew by 59% compared to 2019,” said the report.

The UNHCR report pointed out that more than half of the world’s refugees and IDPs originate in member countries of the Organization of Islamic Cooperation (OIC). There are nearly 80 million people forcibly displaced from their homes across the globe. Due to the pandemic, the lives of both refugees and IDPs have worsened, needing more outside help.

While OIC countries have borne “the brunt” of unfolding political problems worldwide, the increase in Islamic donations have given hope to millions of homeless people, according to the UNHCR report.

“Yet while the number of people in need has increased due to the socio-economic repercussions of the pandemic, individuals and institutions have responded to the situation with incredible generosity, including towards UNHCR’s Refugee Zakat Fund,” the report read. 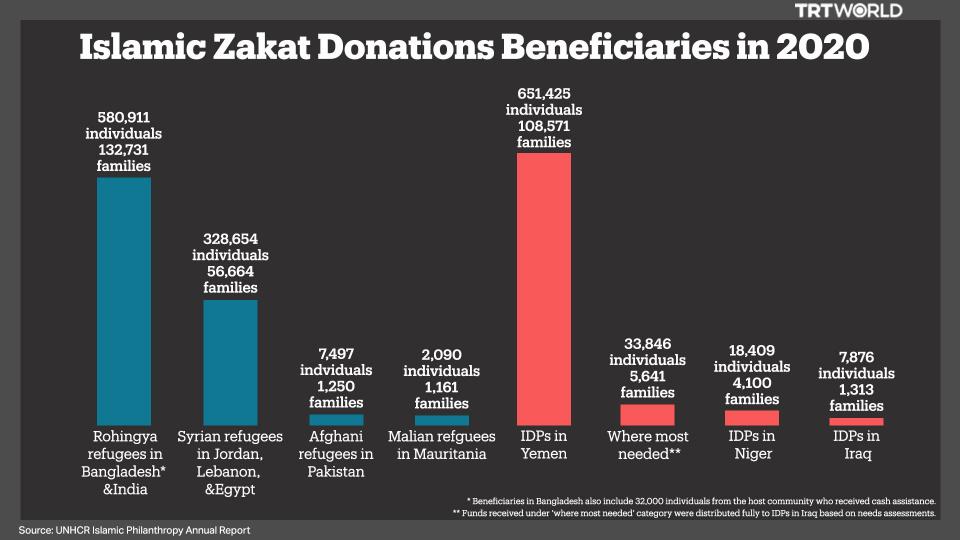 Where the Zakat went

Most Zakat donations went to the Rohingya people from Myanmar and Syria-origin refugees, as well as internally displaced people (IDPs) in Yemen and Iraq, according to the report.

Rohingyan Muslims have faced a genocide, according to the UN, which forced scores of people to flee from Myanmar. Millions of Rohingyas currently live in Bangladesh and India. The Myanmar military recently staged a coup where they have continued to brutally suppress anti-military protesters – this has been widely condemned across the world.

Both Syria and Yemen have gone through devastating civil wars which have killed hundreds of thousands, displacing millions internally and externally.

Nearly four million Syrian refugees live in Turkey, while half of the country’s population has been displaced. Yemen is also currently undergoing what the UN calls the world’s worst humanitarian crisis.

Iraq has also been suffering from intermittent violence since the US invasion in 2003. The country has been effectively sunk into political chaos, and the war has led to the deaths of hundreds of thousands.

Despite political problems and the pandemic, Zakat and other Islamic funds have helped to keep the spirits of the world’s Muslims high.

“The Muslim community responded with generosity to UNHCR’s Refugee Zakat Fund, particularly in the context of the pandemic and its consequences. However, needs are still high, and there is much space left to cover for the expenditures of Zakat-compliant activities,” said Koutoub Moustapha Sano, an academic and Secretary-General of International Islamic Fiqh Academy at the OIC. 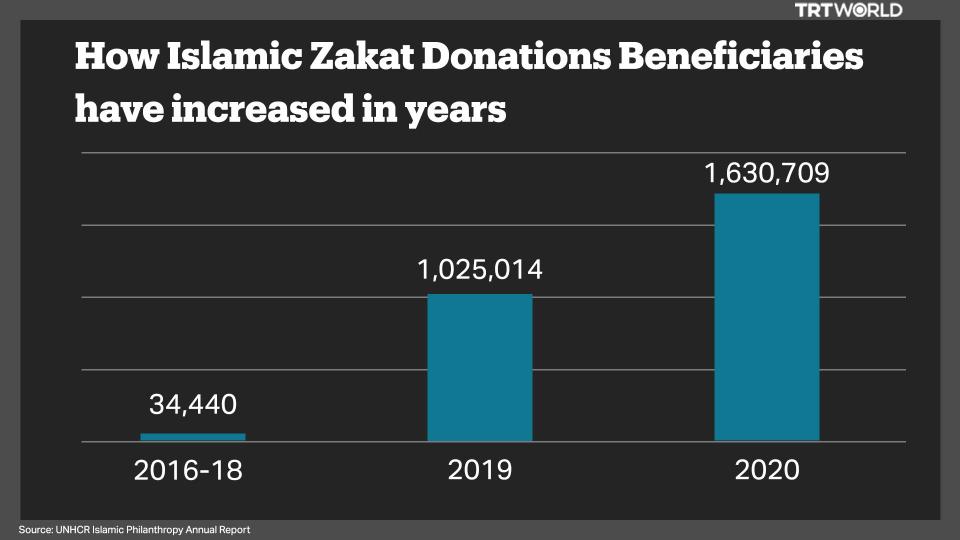 How Zakat can be done easily

Sano also praised the UNHCR’s efforts to use software tools and social media to increase awareness on the dire situation and needs of displaced people.

In 2020, the UNHCR’s global Ramadan campaign ‘Every Gift Counts’ paid back well, garnering support from more than 41,000 people during the year. The UNHCR also started a mobile app called GiveZakat, allowing users to conveniently calculate their own Zakat and donate it in a quick manner.

“Donors making a Zakat donation through the app can track the journey of their donations until it reaches beneficiary families. Donors can also make one-off or monthly Sadaqah donations and can check the various fatwas and endorsements received by UNHCR,” the report said.

The UNHCR has also deepened its connections with Muslim scholars to ensure the Islamic legitimacy of the Refugee Zakat Fund, which is instrumental in distributing Zakat-based donations. In 2020, the international refugee organisation was able to ensure two religious fatwas from two important Muslim institutions, the OIC’s Jeddah-based International Islamic Fiqh Academy (IIFA) and the Muslim World League’s Mecca-based Islamic Fiqh Council.

“Both fatwas endorse UNHCR’s receipt and distribution of Zakat as long as they are done according to Zakat rules, including in the case of UNHCR, to continue following the 100% Zakat distribution policy whereby beneficiaries among refugees and IDPs receive the entirety of Zakat funds,” the report said.

The UNHCR has also developed connections with Islamic finance institutions to ensure the legitimacy of the transactional process.

While Zakat donations increased in record numbers in 2020, this year will need even better numbers to meet the level of $2.7 billion, which the UNHCR estimates for the needy, “to assist 24.2 million persons of concern in Jordan, Lebanon, Yemen, Iraq, Mauritania, Egypt, Bangladesh, India, Pakistan, Thailand, Iran, Nigeria, Burkina Faso and Somalia.”