London: A Muslim woman of Indian descent who spied for Britain during World War Two is being honoured on Friday with a plaque marking her former home in London, more than 75 years after she was executed in Germany.

Noor Inayat Khan is the first woman of Indian origin to be given a blue plaque under the 150-year-old scheme to commemorate notable figures from Britain’s past.

A plaque marking the family home in central London that she left aged 29 to become the first female undercover radio operator sent into Nazi-occupied France will be unveiled by her biographer Shrabani Basu in a virtual ceremony on Friday.

“When Noor Inayat Khan left this house on her last mission, she would never have dreamed that one day she would become a symbol of bravery. She was an unlikely spy,” Basu said in a statement ahead of the ceremony.

“As a Sufi she believed in non-violence and religious harmony. Yet when her adopted country needed her, she unhesitatingly gave her life in the fight against Fascism.” Khan was captured and eventually executed at Dachau concentration camp in 1944, and was posthumously awarded the George Cross, one of Britain’s highest honours, for “acts of the greatest heroism”.

In 2012, following a long campaign by Basu to keep her memory alive, a statue of Khan was put up in London.

Khan was born in Russia to an American mother and an Indian father of royal descent, and educated in Paris, fleeing France for London at the start of World War Two. 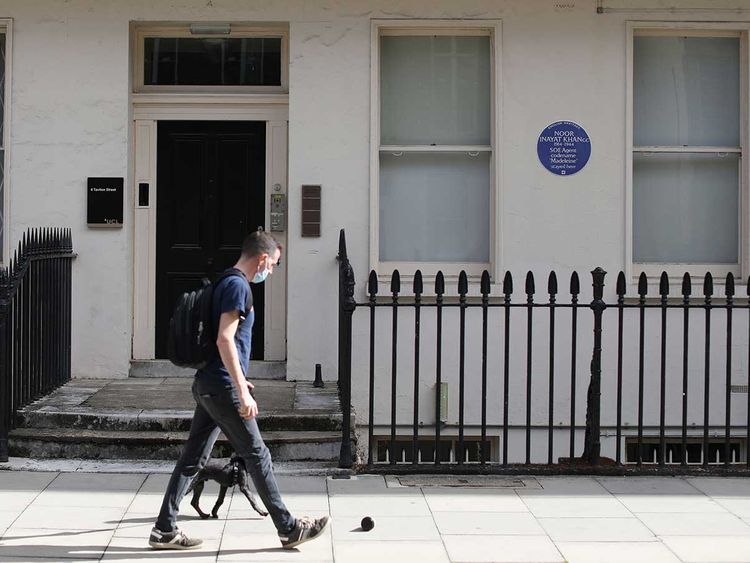 After she returned to France as a secret agent in 1943, the German Gestapo made mass arrests in the resistance groups she was working with, putting her in danger of exposure, and she was offered the chance to go back to Britain.

But she refused to leave her post and when she was captured, gave nothing away to her interrogators, not even revealing her real name. Her final word before she was executed was said to have been “Liberte”, or “Freedom”.

Khan’s plaque is the first to be unveiled since the scheme was paused during the coronavirus pandemic, and comes at a time of intense debate over statues and other forms of commemoration after the Black Lives Matter movement.

Anna Eavis, curatorial director at English Heritage, which runs the scheme, said she was particularly pleased to be restarting it with a tribute to Khan.

“She’s important for reflecting London’s ethnic diversity, and of course she’s also important because she represents the changing role of women in the 20th century in particular,” Eavis said. “That sort of role would have been unthinkable 100 years before. So I think the blue plaque scheme is a very important way of giving visibility of those changes for women.” Just 14% of the more than 950 blue plaques in London celebrate women and in 2016 English Heritage launched a “plaques for women” campaign, aiming to redress the balance.

Later this year it will unveil plaques to the artist Barbara Hepworth and to Christine Granville, who also served as a secret agent in World War Two.