Ed Husic and Anne Aly have become the first Muslim ministers in Australia’s history in a move that’s been hailed as a signal to the world about an improvement in the representation of politics in the country.

Ed Husic and Anne Aly — Australia’s first Muslim government ministers — have recognised the symbolic significance of their appointments but insist they’re focused on now using these roles to make a difference in the lives of Australians.

The swearing-in of the pair marked a historic moment in Australia with Mr Husic and Ms Aly becoming the first members of the Muslim faith to enter the federal ministry.

Mr Husic became the first male of his faith to serve in the cabinet, taking on the portfolio of the Minister for Industry and Science. Ms Aly — the first woman of the faith to serve on the frontbench — took on the outer ministry roles of Minister for Early Childhood Education and the Minister for Youth.

Speaking with SBS News, Mr Husic said entering the cabinet “definitely” came with a “weight of responsibility” that he wants to live up to by making a positive contribution.

“Anyone who says symbolism doesn’t matter doesn’t know what they’re talking about,” he said.

“This is a really important symbolic moment in terms of bringing the country together.

“We’ve got a big job to do and we need a lot of people involved working together in the same way to improve the quality of life for all Australians.”

Anyone who says symbolism doesn’t matter doesn’t know what they are really talking about.

Mr Husic added the appointment of the pair was not just about them, but “Muslim Australians knowing that we can be part of something that’s big.”

“To be able to send a really powerful signal to young Muslim Australians about getting involved and being able to participate with the doors open,” he said.

“There would be young people, particularly migrant kids, who would’ve many times felt like they were labelled as part of the other – and today they become part of [the] all.”

Both were sworn into their positions during a ceremony at Government House on Wednesday using the Quran – as they affirmed their commitment to the new positions. 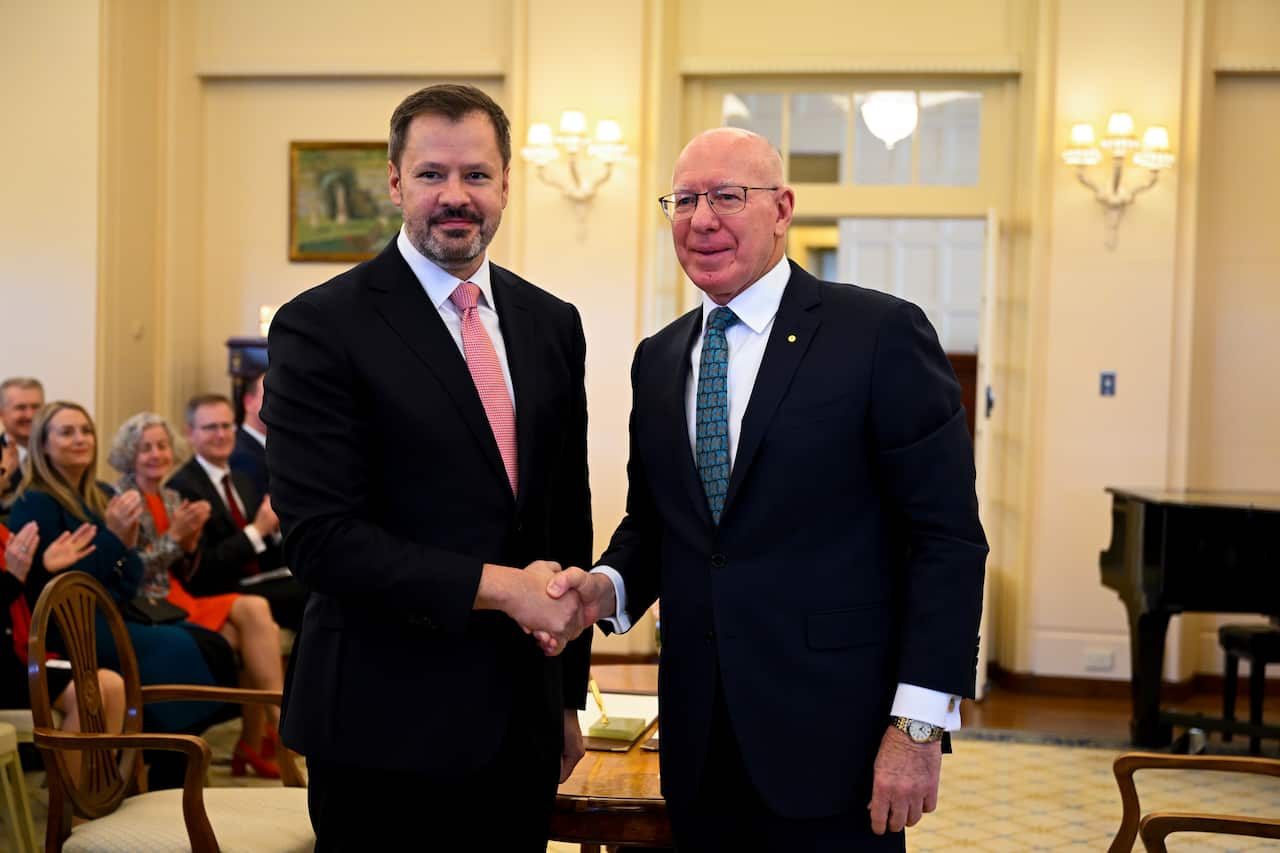 Mr Husic — who represents the western Sydney seat of Chifley — became the first Muslim to be elected to parliament in 2010.

He is the son of Bosnian Muslim immigrants and entered politics after a career he describes as working in roles across the private and public sectors.

He’s said that, despite being proud of his faith, he didn’t want to be seen through a single lens as a politician from a Muslim background.

Ms Aly — the member for the Western Australian seat of Cowan — was born in Alexandria, Egypt, and moved to Australia with her family when she was two years old.

She said she hoped her own personal story as a daughter of migrants whose father was a bus driver showed anyone could succeed in achieving their aspirations.

“But that I open the floodgates so that more and more young women who desire to have a career in politics can do so.”

Ms Aly has a master’s degree and a PhD from Edith Cowan University, and held a number of senior positions within Western Australia’s public service before entering politics.

She also worked at both Curtin University and Edith Cowan University, with a focus on counter-terrorism and countering violent extremism.

Mr Husic said both Ms Aly and himself had used their unique perspectives in parliament to advocate on issues, such as speaking out against far-right extremism following the Christchurch massacre.

“Because people wanted to use religion in a way to not only divide but as an excuse to conduct acts that just go beyond the pale,” he said.

“That’s where diversity counts, that different voices are brought forward, that they are factored into the way governments make decisions (and) the way they respond.”

Prime Minister Anthony Albanese has praised his cabinet’s diversity, which he has declared has a record number of women with 19 holding minister or assistant minister positions.

Mr Husic said the adoption of such diversity needed to be the “starting standard” for choosing the decision-makers of the ministry moving forward.

“It will be very difficult for governments of the future regardless of political persuasion to go back and be lesser than the starting standard as I would call it,” he said.

President of the Australian Federation of Islamic Councils (AFIC) Rateb Jneid has sent letters to both Mr Husic and Ms Aly to congratulate them on their recognition.

“We know this is a very positive step for Australia – now truly embracing its multicultural and multi-religious constituency,” he told SBS News.

“Their inclusion amongst the ministers of the federal government will send a very positive message throughout the world.”

Rita Jabri-Markwell from the Australian Muslim Advocacy Network said the elevation of both politicians to the federal ministry represented a great moment for Australia’s democracy.

She said she believed having people of the Muslim faith represented in the ministry would also help guard against the sentiments of Islamophobia in the community.

“Their presence alone will make the difference,” she said.

“Their success will make the difference, people seeing them contributing and seeing them so dedicated to their portfolio will shatter a lot of the negative stereotypes.”

Salman Rushdie on ventilator and ‘likely lose to one eye’ after attack, says agent