Elvis Ali Hazarika, a 39-year-old swimmer popularly referred to as the Merman of India, has become the first swimmer from Northeast India to swim through the coast of Mumbai in the Arabian Sea from the Gateway of India. He undertook this challenge along with Maharashtra’s Ganesh Palande and Rimo Saha of West Bengal.

Elvis Ali Hazarika and his relay team completed the 168 km long adventure swim, called Indo-Arabian Gateway Swim’ on Thursday. Starting on March 8, the adventure swim was completed on March 10. The swimming campaign was aimed at spreading awareness about the pollution of the sea and rivers. The swim was supported by Kreeda Bharati Assam.

Speaking with Awaz-The Voice, Hazarika said: “We completed the 200 km distance in a record time of 53 hours. It was a very difficult swim as we swam amid big fishes, jellyfish, dolphins and in some parts against the stream. We also encountered many snakes near Juhu in Mumbai. Despite all the challenges, the thought of aborting the swim halfway never came to our minds.”

“It was particularly dangerous and risky to swim at night. It was tiring but my team and I did our best to complete the swim. After completing the feat, I am facing health issues. All my limbs are aching now,” he said. 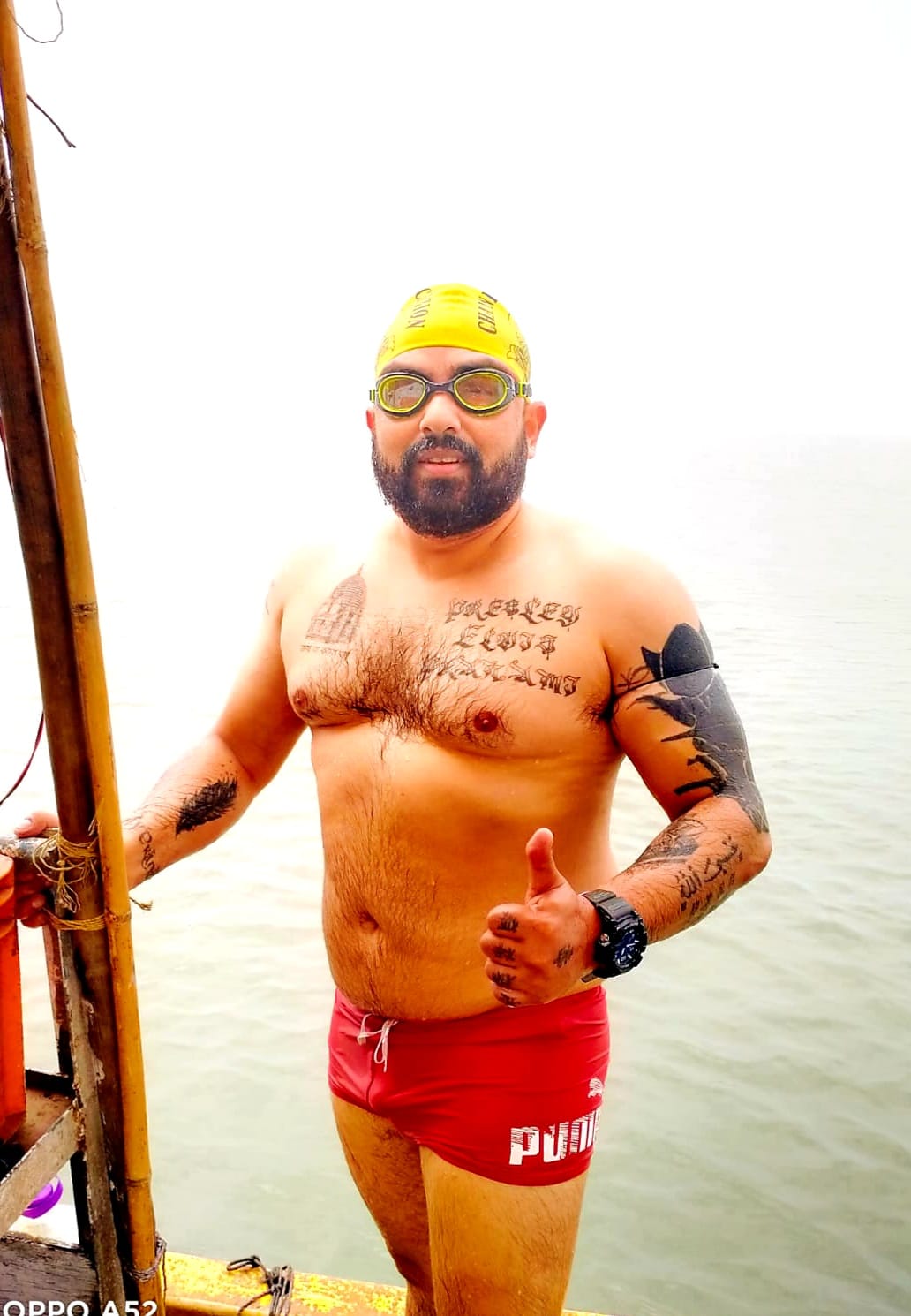 The swimmer thanked the Swimming Association of Maharashtra, the Government of Maharashtra, and Mumbai Police for their co-operation and support. “Without their support, the swim would not have been possible. I thank everyone in my motherland Assam for always blessing me and supporting me. I think I have been able to achieve this feat because my family, mother and my wife Pranami, and my friends are always with me,” he said.

This was the longest open water swim for Hazarika. His next adventure will be to cross the North Channel in August.

After he had to give up his North Channel (UK) campaign due to the Covid-19 pandemic in 2020, Elvis swam 38 km from Dharmatal Jetty to Gateway of India in the Arabian Sea.

He became the first from the Northeast to swim across the whale-shark-seal-dolphin-infested Catalina Channel (USA). His have to give up his mission to cross the English Channel in 2016 for lack of acclimatization.

Elvis started swimming from the age of seven and in 1989 Sub-Junior Nationals he won a silver medal. The next year, in Kolkata (then Calcutta), he scripted two new national records in the Sub-Junior Nationals. He has so far scripted about 23 national records in his competitive career. Of the 68 medals he has won, Elvis has won 20 international medals, including six gold.

At the age of nine, Elvis represented India in the Madras (now Chennai) and Nepal South Asian Federation Games in 1995 and 1999. He won six medals, including two gold, two silvers, and two bronze, at the Nepal SAF Games.

Elvis became the first Indian male swimmer to win an international gold medal at the 1992 Asia-Pacific Swimming Championships in China. He also won six medals, including two golds at the 1994 Asian Swimming Championships. This achievement attracted the attention of the then chief minister of Assam Hiteswar Saikia, who invited Elvis to his home and felicitated him.

However, in 2000, when he suffered from Septicemia and had to be hospitalized for seven months, his Olympic dream was shattered. Otherwise, he was sure to be part of the Indian contingent.

Blinken postpones China trip as balloon over US fuels tensions