Since Saudi Arabia executed 47 people in one day, exasperation has poured in from human rights activists and sectarian anger has spread in the Middle East — over the death of one man.

Shia Muslim cleric Nimr al-Nimr was a fervent dissident against the Sunni Muslim Saudi royal family and called for their deposal during the Arab spring uprisings in 2011.

He died on Saturday alongside 46 terrorism convicts. Later that night, in predominantly Shia Iran, Molotov cocktails smashed into the Saudi embassy in Tehran. Protesters shouted as it caught fire. Some went inside and ransacked offices

Police donned riot gear and arrested 40 people. Embassy staff was not present during the fire attack.

Iranian President Hassan Rouhani condemned al-Nimr’s execution in Saudi Arabia, and he also blasted the attack on the Saudi embassy in Tehran and on a Saudi consulate in another Iranian city.

“In no way is this justifiable & foremost disrespects #Iran. All Iranian officials are fully committed to confront these illegal acts,” he said in a tweet.

Earlier, the Iranian government had summoned the Saudi ambassador to condemn al-Nimr’s execution. Saudi Arabia returned the slap, summoning the Iranian ambassador in Riyadh to vehemently object to Iran’s condemnation.

Al-Nimr was an outspoken critic but non-violent, Khamenei said.

The supreme leader also posted to his website a critical illustration that compared a Saudi Arabian executioner with an ISIS Jihadi preparing to behead a victim. The illustration calls them “white ISIS” and “black ISIS” and asks, “Any differences?”

Saudi Arabia and Iran are already bitter rivals. And current regional conflicts have stoke animosity between them.

In Yemen, Saudi Arabia is fighting against Houthi rebels, who are allied with Iran. And in Syria, Saudi Arabia advocates the overthrow of President Bashar al-Assad, who is an ally of Tehran.

On Sunday, protesters took to the streets again in Iran, as well as in Iraq, to condemn al-Namr’s execution.

In Iraq, a Shia icon directed followers to protest in front of the Saudi Arabian embassy in Baghdad. Cleric and politician Muqtada al-Sadr also called on Shia-dominated government to shut the embassy down.

The 47 condemned were either shot by firing squad or beheaded. Though the Saudi government did not say how al-Nimr died, beheading has a special meaning to Shiites, as it was the fate of a historic cleric, Imam Husayn. 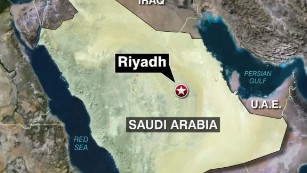 Al-Sadr made the assumption that al-Nimr had suffered the same fate. “He was executed with a sword, the same way ISIS scoundrels (do it),” he said.

Al-Sadr’s word carries weight with Shiites beyond Iraq’s border, and the spiritual leader called for them to protest, too — including in Saudi Arabia.

Iraqi Vice President Nuri al-Maliki castigated the Saudi royal family with the dead dissident’s own wishes. “The crime of executing Sheikh Nimr al-Nimr will topple the Saudi regime,” he said.

In Lebanon, which also suffers from the Shia-Sunni divide, the Shiite militia Hezbollah called al-Nimr’s death sentence corrupt and said his execution amounted to assassination.

Who was Sheikh Nimr al-Nimr?

Al-Nimr was the imam of a mosque in a majority Shiite area of eastern Saudi Arabia, where people have long complained of discrimination at the hands of the Sunni majority.

Iran’s rise as a regional power in the Middle East has exacerbated those tensions, resulting in what human rights advocates call a systematic crackdown on minority Shiites in the kingdom.

When the Arab Spring uprisings rolled around in 2011, al-Nimr ardently supported anti-government protests in Saudi Arabia. He wanted the Saudi royal family deposed but publicly advocated peaceful protests over violence.

“The weapon of the word is stronger than bullets, because authorities will profit from a battle of weapons,” he told the BBC.

On Sunday, Al-Nimr’s brother, Mohammed al-Nimr, called for the cleric’s supporters to protest against his execution and to do so peacefully.

“I am calling on people not to get dragged into violence and to practice restraint and avoid bloodshed,” he told CNN.

What was he convicted of?

In 2012, Saudi Arabia accused al-Nimr of fleeing authorities, ramming a security forces vehicle and resisting arrest. His family and critics have disputed the government’s account.

Authorities shot al-Nimr in the leg during the arrest, and his family said that he had been denied proper treatment for his wounds during his imprisonment — much of which Amnesty said was spent in solitary confinement.

A Saudi court convicted al-Nimr in 2014 after what Amnesty International described as a “deeply flawed” trial marked by numerous irregularities. The sheikh was not allowed to prepare a proper defense, Amnesty said.

“Eyewitnesses, whose testimonies were the only evidence used against him, were not brought to court to testify. This violates the country’s own laws,” Said Boumedouha of Amnesty International said.

Al-Nimr was convicted of inciting sectarian strife, sedition and breaking allegiance with the Saudi ruler. He was sentenced to death.

Human rights activists saw al-Nimr not as an insurgent but as a dissenter and were appalled at the sentence.

Amnesty International said the case against him was part of a systematic effort by the majority Sunni government to crush Shia voices.

His execution prompted the U.S. State Department to call on Saudi Arabia to respect human rights and permit peaceful dissent.

“We are particularly concerned that the execution of (al-Nimr) risks exacerbating sectarian tensions at a time when they urgently need to be reduced,” spokesman John Kirby said.

U.N. Secretary-General Ban Ki-moon was “deeply dismayed” by the executions and called again for an end to the death penalty. He called on leaders in the region to prevent an escalation of sectarian tensions.

Qatar says insects not ‘halal’ after EU approves it as food