Statement from Dubai Ruler’s Court says Sheikha Latifa, who has not been seen publicly since March, is ‘safe’ with her family in the emirate

An Emirati princess, who has not been seen publicly since a failed attempt to escape her family in March, is “safe” with that same family, according to a statement by the Dubai Ruler’s Court.

Sheikha Latifa bint Mohammed al-Maktoum, daughter of the United Arab Emirates’s prime minister, Sheikh Mohammed bin Rashid al-Maktoum, who is also the ruler of Dubai, was apparently apprehended by armed men on a boat off the Indian coast earlier this year.

The court’s statement on Thursday to the UK’s Sky News said Latifa celebrated her 33rd birthday with her family this week and “is deeply saddened by the continued media speculation” regarding her whereabouts.

A few days after her apprehension, Latifa’s case drew public attention as a pre-recorded video describing what she said was the agony of her restricted life and overbearing family circulated online.

In the video, Latifa said: “My father is the most evil person I have ever met in my life. He’s pure evil. There’s nothing good in him.”

She also spoke of a previously unsuccessful bid for freedom aged 16, after which she claimed she was not allowed to drive, was monitored night and day, locked up and sometimes drugged.

The court’s statement was released just hours before a BBC documentary broadcast on Thursday evening, which detailed how Latifa had planned her bid for freedom for seven years.

In Escape From Dubai, filmmakers trace Latifa’s movements and mood through people involved in her escape plan, including a French former spy, a Finnish confidante and the Filipino crew of a boat that allegedly attempted to take her to India.

The court’s statement said: “We are aware and deeply saddened by the continued media speculation regarding Her Highness Sheikha Latifa bint Mohammed al Maktoum.

“This private family matter has caused significant upset and distress for all concerned, most of all Sheikha Latifa.

“She and her family are looking forward to celebrating her birthday today, in privacy and peace, and to building a happy and stable future for her.”

‘Detained against her will’

Herve Jaubert, a French ex-spy and businessman, says he was first contacted by Latifa in 2011. She was drawn to him after hearing he had successfully escaped Dubai previously.

In 2014, the princess met Tiina Jauhiainen, a Finnish capoeira instructor, and the two became close. Jauhiainen would become a key player in the escape plan. 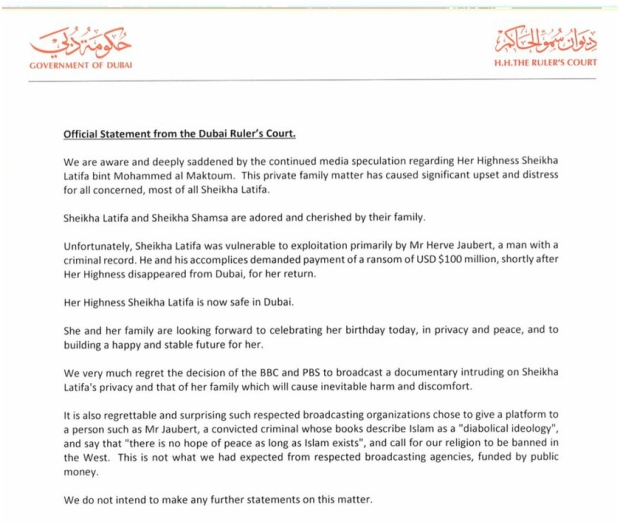 According to Jauhiainen, the two met on the morning of her breakout to have breakfast.

The two women had done so daily in the buildup to her flight, in an attempt to quell the suspicions of the princess’s bodyguards when the time came to leave.

After changing clothes and sunglasses, the Finn said, the two drove to neighbouring Oman. At the Omani coast, Latifa and Jauhiainen apparently travelled across the water by jet ski and inflatable boat for 40km, before being picked up by Jauber on a yacht.

“The waves were about a metre and a half and we had the wind pushing towards us so it took many hours before we got to the boat,” Jauhiainen recounts.

Once aboard, the princess reached out to relatives, journalists and the activist group Detained in Dubai, with little response.

“She was sending emails to reporters and no one replied back to her. Nobody seemed to believe her, so she seemed desperate and sad like you know, who is there to help me now you know they can come after us any day,” Jauhiainen remembers.

According to the BBC, her boat was raided a few days later, 50km off the coast of Goa.

The court’s statment said: “[Jaubert] and his accomplices demanded payment of a ransom of $100m, shortly after Her Highness disappeared from Dubai, for her return.”

Guernica Chambers has been instructed by Detained in Dubai to represent Jauhiainen, Jaubert and Latifa in legal proceedings.

In a statement, it said: “If it is that Sheikha Latifa is with her family, and that this is a family matter for which she seeks no public concern, then why is she prevented from communicating this publicly, or to any individual that she considers to be a friend.

“The only conclusion that can be drawn is that Sheikha Latifa remains detained against her will.”

John Bolton: ‘Second term for Trump a danger to Israel’

John Bolton: ‘Second term for Trump a danger to Israel’