“When you cannot even take in a nail cutter, how did this youth get into the lounge with that sharp instrument,” asked YSRCP MLA Roja Selvamani.

In a major security breach, Y S Jagan Mohan Reddy was slashed with a sharp object by a youth at the Visakhapatnam airport Thursday afternoon. The youth went near Jagan on the pretext of clicking a selfie, and slashed the leader on his left arm. The youth, Janapalli Srinivas Rao, was immediately arrested and whisked away by airport police.

After receiving first aid for the wound Jagan left for Hyderabad. At Hyderabad, Jagan was taken to a private hospital for blood tests and checkups to ascertain if the knife was poisoned. Jagan who is on his last leg of Praja Sankalpa Yatra in Vizianagaram district was at the Visakhapatnam airport to return to Hyderabad for a court hearing on Friday. 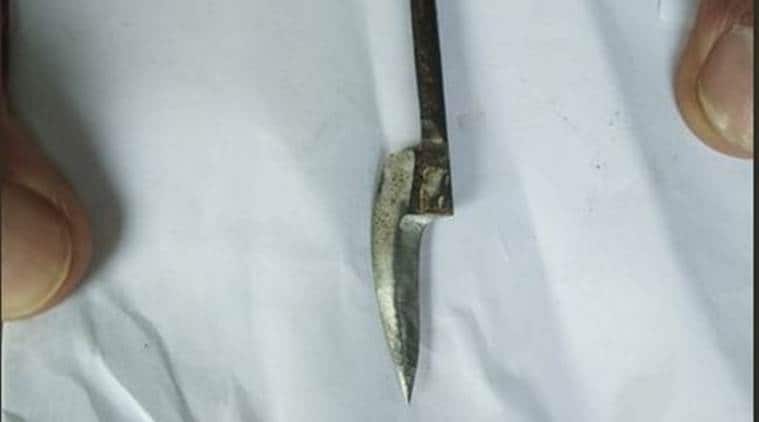 Andhra DGP R P Thakur said that Rao, 30, was as a waiter at an airport restaurant and had served beverages to Jagan at noon. “The second time he came near Jagan claiming to be his fan he started chatting with him and requested for a selfie. When Jagan obliged, he took out a phone from his left pocket and from his right pocket he took out a small knife and slashed Jagan on the left arm,” Thakur said.

The DGP said that the incident occurred in the VIP lounge in the presence of CISF officers, Jagan’s two personal security officers, and several party activists.

YSR Congress Party workers started raising slogans against the TDP government and CM N Chandrababu Naidu. The party leaders are livid that the youth was allowed to walk into the waiting lounge by the security officials without proper checking. “When you cannot even take a nail cutter, how did this youth manage to get into the lounge with that sharp instrument,” asked YSRCP MLA Roja Selvamani. She accused the ruling TDP government of lapses in providing security to Jagan. “When someone of the Jagan’s stature could be attacked in a public place such as an airport one can imagine the plight of common citizens in Andhra Pradesh. This knife attack was clearly aimed at the YSRCP chief’s life and that it was pre-planned,” she said.

Taking to Twitter, the party said, “Clearly, it is the government’s failure to provide security for the opposition leader.”

The owner of the restaurant Harshavardhan said that Srinivas Rao had no criminal background. “His police verification was done and he has no prior cases against him. He came across as a very nice person; always greeted people and was very well behaved. I cannot imagine why he attacked Jagan,’’ he said.

Refuting allegations that as he is a supporter of ruling Telugu Desam Party (TDP) and that he instigated Rao to attack Jagan, Harshavardhan said he was only a supporter and member of TDP and had no reason to get involved in such a conspiracy. “It is true that I am associated with TDP and I had tried for a ticket in 2014 to contest from Gajuwaka Assembly constituency. But I am a businessman first and I would not jeopardize my livelihood by asking someone from my restaurant to attack a political leader. The small knife that the youth used to attack Jagan does not belong to my restaurant. We don’t use such kind of instruments in my restaurant. All knives and sharp objects of my restaurant have been accounted for. Srinivas Rao joined as a waiter about a year ago,” Harshavardhan said.

Condemning the attack on the leader of the opposition in the Andhra Pradesh Assembly, Union Minister for Civil Aviation Suresh Prabhu tweeted, “Shocked by the attack on Mr Jagan Reddy. Asked all agencies to investigate the matter thoroughly, including @CISFHQrs. Asked secretary civil aviation to fix responsibility. I strongly condemn this cowardly attack, we will punish the guilty. Investigations are underway, started immediately.”

A letter has also been seized from the pocket of Srinivas Rao. Janapalli Subbaraju, elder brother of Srinivas Rao, said the family is unable to believe that he attacked Jagan. “He is a great fan of Jagan, our family supports him and we are all his fans. That is why we are so shocked to hear that my brother attacked Jagan,” Subbaraju said.