In the run-up to the 2019 Lok Sabha elections, a mobile application is coming in handy for those whose names are missing or have been “deleted” from the electoral rolls as well as for those who want a voter-identity card.

Sofia Fatima, 25, of Okhla, who is a second-time voter, found her name missing on the Election Commission of India (ECI) website. Her husband then told her about the Missing Voters app, about which he was informed by a friend. After downloading the app, Sofia registered herself. That was over a fortnight ago. Her name has been added to the list now.

Likewise, 21-year-old Md Anas from Uttar Pradesh, who lives in Delhi’s Jamia Nagar, did not have a voter ID. Again, the Missing Voters app came to his rescue.

Since the launch of Missing Voters app earlier this year, thousands of eligible voters have been added to the rolls, most of them aided by hundreds of volunteers who downloaded the app to lend their help to the project.

Hyderabad-based Khalid Saifullah, whose RayLabs Technologies developed the app, said he started working on it during the Karnataka Assembly elections last year.

Saifullah, along with Abusaleh Shariff, a member secretary of the Rajinder Sachar Committee, had studied the electoral rolls and claimed to have found that nearly 20 per cent of Muslims in Karnataka were missing from the voters’ list. “Some 12 lakh new voters were enrolled through the app in three weeks,” he claimed.

Buoyed by success in Karnataka, Saifullah mined the available data on the ECI website and claimed to have found that at least 10 per cent of voters were missing from the electoral rolls. “That is seven crore people out of nearly 90 crore voters in the country,” he said, adding that most of those missing were Muslims and Dalits.

Saifullah used a simple mechanism to identify the missing voters: Any household with just one registered voter was a red flag for him. He found that while among other religious groups the percentage of households with just one voter was 11, it was 20 in case of Muslims and Dalits. 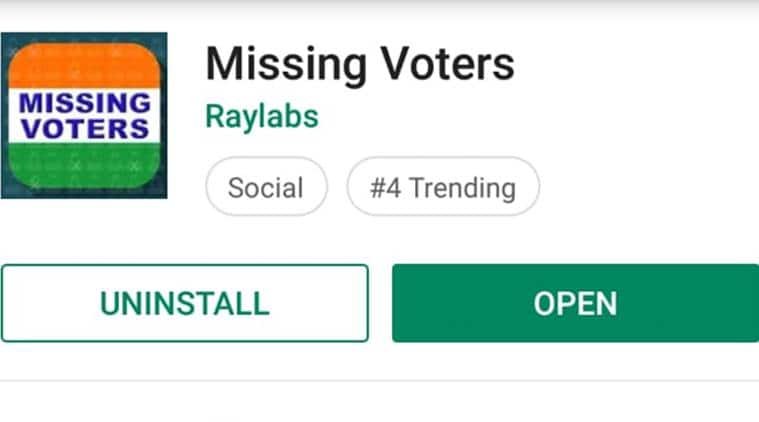 While an eligible person can also enroll and re-register themselves on the ECI website, Saifullah said the process is cumbersome. “One has to fill a very long form. Then there are issues of accessibility, awareness and literacy. The app, on the other hand, is easy to use and the follow-ups are done by us,” he said.

One of the volunteers, Smita Dhruva of Shivadi in Maharashtra, said, “I work in slum areas. I have used the app to get a number of voters enrolled. I have so far gotten 1,530 people enrolled.”

As on March 24, there were 88.493 unique users of the app. Saifullah said 41,140 voters have enrolled or re-registered through the app. The Missing Voters app is available for Android and Apple users. Users can also get the app link via SMS by giving a missed call to 8099 683 683.