New Delhi: The education department of Rajasthan government has asked all schools to take students to a fair organised by Hindu Spirituality and Service Foundation where booklets on “love jihad, Christian conspiracies” are being distributed by right-wing groups.

A Bajrang Dal stall has books expounding how girls can save themselves from “love jihad”, citing actors Aamir and Saif Ali Khan’s case in which the men “abandoned their Hindu wives to marry other Hindu women.”

Another book says that Muslims have been using love jihad to convert Hindus for the last thousand years. A pamphlet, with the picture of actor Kareena Kapoor Khan, explains how Muslim men lure Hindu women into loving them, which is followed by conversion.

“Muslim boys’ regular visits to Hindu households, their incessant conversations with Hindu daughters, their respect for parents, who they address as ‘Mataji and pitaji’ etc. are all part of a larger scheme,” the pamphlet reads. Furthermore, it explains that the conversation between boys and girls easily diverts towards love and relationships, and the girl, then, wants to marry the same boy. 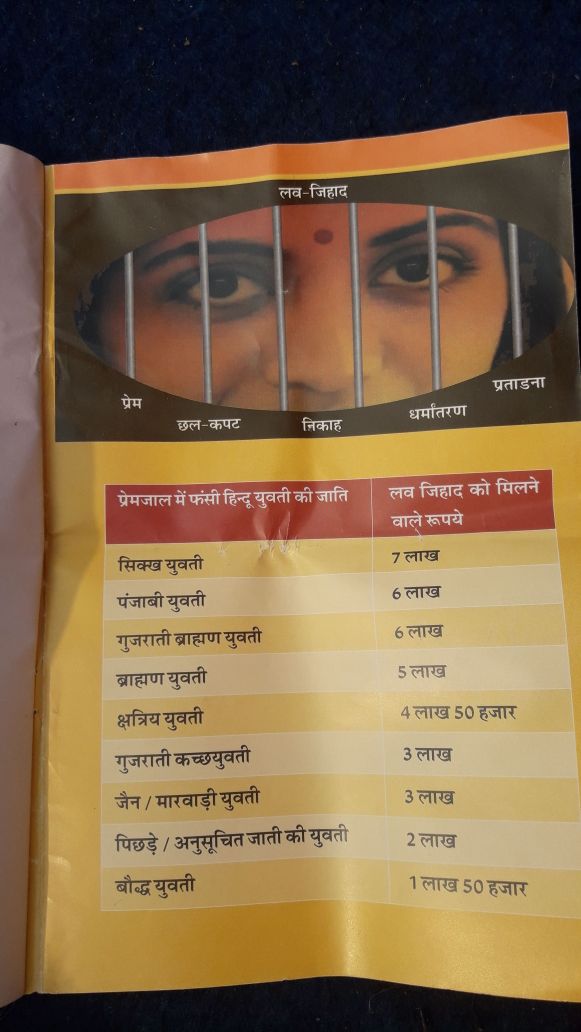 “If the family doesn’t assent to their demands, girls elope with Muslim boys, get married in an Islamic way, and convert to Islam,” reads the pamphlet, adding, “converting others to Islam is a service in their religion”.

Another book, blue in colour, says that after converting Hindu women, Muslim men throw them either into prostitution business or use them to spread “violent jihad”.

The lessons do not stop here. A woman, wearing a bindi on her forehead, features behind bars on a yellow brochure. The booklet explains the cycle or steps comprising the process of love jihad. “Love, fraud, Niqaah, conversion lead to persecution,” according to this book, which also mentions the amount of money offered by Mulsim men to attract Hindu women.

The government’s decision was met with scorn by the Congress-led Opposition that accused CM Raje of failing to deliver on promises, diverting people’s attention to topics of no consequence.

Congress leader Sachin Pilot said that it is clear that the Rajasthan government is openly supporting organisations “spreading venom among school kids”. “They want to alter the narrative — from real issues of job and corruption — for the purpose of elections.”