The Congress on Monday said its doors will remain open for seemingly estranged Sachin Pilot.

The Rajasthan Congress Legislature Party on Monday afternoon passed a resolution supporting CM Ashok Gehlot after days of tussle between him and his deputy Sachin Pilot, the rebel leader who claimed that he has the support of over 30 party MLAs in the state’s 200-member assembly.

According to sources, Pilot and 16 other MLAs were missing from the meeting, a claim we are verifying. But every indication suggests that the crisis in Rajasthan has blown over for now.

The resolution said strict action would be taken against those who will act against the government. It was also said that the BJP is trying to crush democracy which is an insult to the eight crore people of Rajasthan.

Strong disciplinary action was recommended against any Congress MLA and office-bearer who “weakens” the party.

The Congress Legislature Party went on to express its full confidence in Congress President Sonia Gandhi, Rahul Gandhi and Ashok Gehlot too.

“Fearing exemplary works and public service of Congress government, the BJP-led conspiracy is trying to destabilise Congress’ state government by indulging in horse-trading of MLAs and trying to murder democracy by using money and political power,” read the resolution.

“It is unfortunate that the BJP did not learn lessons from the defeat in the Rajya Sabha elections and are trying to destabilise Congress government using corrupt means. This ripping off of democracy by BJP is an insult to 8 crore people of Rajasthan, they will not accept it.

Rahul Gandhi and Priyanka Gandhi are among top Congress leaders who are in touch with Pilot and working to placate him, just a day after the deputy CM brought his rift with Chief Minister Gehlot out in the open. 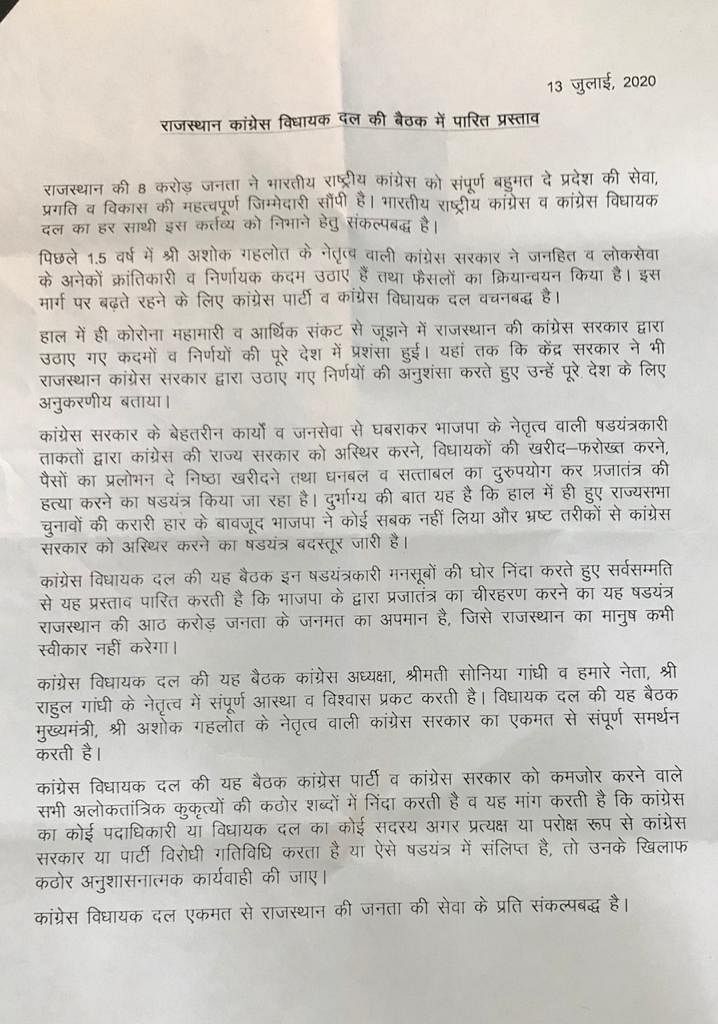 The Grand Old Party on Monday said its doors will remain open for Sachin Pilot.

The Congress Legislature Party meeting began about three hours later than scheduled, with ministers and MLAs flashing victory signs for the camerapersons.

Surjewala said that the party’s top leadership had spoken to Pilot several times in the last 72 hours.

He added that the differences in a family can be resolved within the family, suggesting that Pilot and other MLAs should come and discuss grievances at party forums.

Roots of the tussle

Differences between the two leaders were brewing for some time but they reached a tipping point on Sunday after Pilot, along with a group of MLAs supporting him, rushed to Delhi to meet Congress chief Sonia Gandhi.

He reportedly could not meet her. Sources said Avinash Pandey, AICC general-secretary in-charge of Rajasthan, told Sonia there was no danger to the government.

Meanwhile, Rahul Gandhi spoke to Pilot over phone and sent senior leaders Ajay Makan, Randeep Singh Surjewala and Avinash Pandey to Jaipur to meet Gehlot. “There is no reason for the BJP to be happy. All Congress party is together…,” Surjewala had told reporters after reaching Jaipur on Sunday night. The three leaders then went straight to the CM’s residence.

The political turmoil in Rajasthan, coming barely three months after the debacle of the Congress government in Madhya Pradesh following Jyotiraditya Scindia’s dramatic switch-over to the BJP due to similar differences with senior party leaders Kamal Nath and Digvijay Singh, had left senior leaders worried.

Over 50 Shanties of Rohingya Refugees Gutted in Fire in Delhi; No Casualty