In Pokaran, Shale Mohammad of the Congress edged out the BJP’s Mahant Pratap Puri — the chief priest of the Taratara sect in Barmer, who models himself on UP Chief Minister Yogi Adityanath — by just 872 votes. 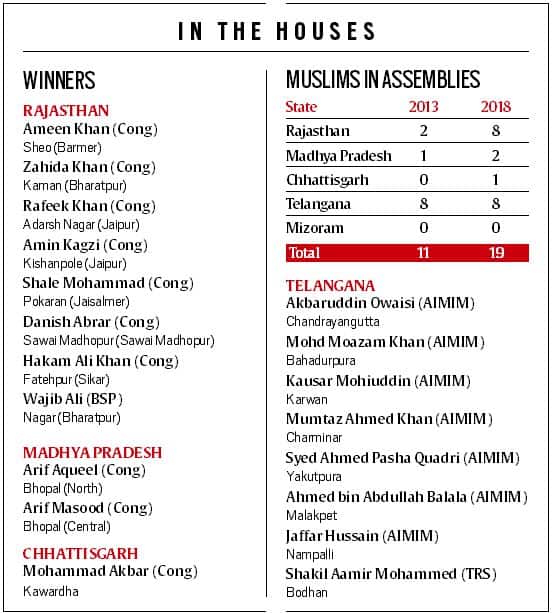 MADHYA PRADESH
After a decade, the House will have more than one Muslim member. Both MLAs in the new Assembly belong to the Congress. Arif Aqueel has represented the Muslim-dominated Bhopal (North) seat six times since the 1990s, and was the only Muslim in the Assemblies elected in 2008 and 2013. The other Muslim member in the 2018 House is Arif Masood from Bhopal (Central).

The only Muslim candidate fielded by the BJP in 2018 was former Congress Minister Rasool Ahmed Siddique’s daughter Fatima, who lost to Aqueel.

CHHATTISGARH
In a state where Muslims are 2% of the population, the Congress fielded two candidates from the community, and the BJP fielded none. One of the Congress candidates, Mohammad Akbar, won the Kawardha seat with the biggest margin in the state: 59,284. The Congress’s other Muslim candidate, Badruddin Qureshi, lost at Vaishali Nagar.

TELANGANA
Parties in Telangana fielded 26 Muslim candidates at the 119 seats. Eight — seven from the All India Majlis-e-Ittehad-ul Muslimeen (AIMIM) and one from the Telangana Rashtra Samithi (TRS) — won.

The AIMIM fielded eight Muslims; only the one at Rajendranagar — Mirza Rahmat Baig — lost, coming in behind the candidates of the TRS and TDP.

The BJP fielded one Muslim, Shehazadi Syed, who lost to Akbaruddin Owaisi of the AIMIM at Chandrayangutta. The Congress fielded 9 Muslims and the TDP one; all lost. The TRS fielded eight Muslim candidates; Shakil Aamir Mohammed won in Bodhan.

Northeast Delhi riots: Mob set victim on fire ‘to check if he was really dead’

Why Azerbaijanis and Armenians have been fighting for so long

8 Patients Killed In Fire At ICU In Ahmedabad Covid Hospital