Tension gripped Sheetla Mata Colony here on Wednesday after the Municipal Corporation of Gurugram (MCG) sealed a multi-storey mosque in the area as part of its sealing drive against illegal structures.

The Hindu outfits in the city had objected to the use of loudspeakers at the mosque a week ago saying that it caused inconvenience to the residents. 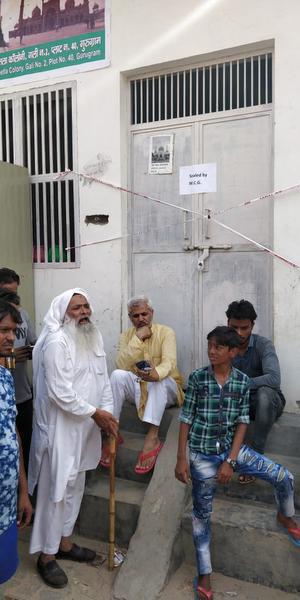 The members of the Muslim community gathered outside the mosque in large numbers as the news spread and accused the administration of acting under pressure. “A temple, a church and all houses in this locality are illegal as they fall under 300m radius of the Air Force ammunition depot. And there are hundreds of such structures. The mosque has been sealed under pressure from the Hindu outfits,” said Hazi Aleen Khan.

The locals said it was pick-and-choose as fresh illegal construction was going on all around in the area, but MCG chose to seal a four-year-old structure.

Mohammad Akhtar, 69, alleged that notice was not served before the sealing. He said that the loudspeakers were removed by the mosque committee soon after the objection was raised by the locals a week ago.

The MCG, in a tweet, said: “11 Illegal structures within 300 mtrs of the Ammunition depot have been sealed today. Despite repeated directions from the Administration constructions were identified ongoing at few sites.”

MCG Public Relations Officer Satyabir Rohilla said prior notices were not required for sealing drive against illegal structures within the ammunition depot.