Mohammed Moinuddin’s shop Mehboob Radio Service in the walled city of Hyderabad is a charming musical mess. The dingy and dimly-lit small room that exudes an old-world charm and looks more like a tinkering shop is choc a bloc with wind up radios of brands such as G Marconi, RCA, Normandy Germany, GEC, Grundig, Murphy, Philco, HMV, Phillips and many more some of which are a century old.

It is a Monday afternoon and Md. Moinuddin, the lone repairer of Radios in the City of Hyderabad is trying to fix the broken part of an antique radio Phillips, a short-wave machine of 1948 delivered to him a few days ago by a radio enthusiast from the UK.

This second-generation repairer Md. Moinuddin says people from all over the country and abroad come to get their radios repaired here. There are many who are rediscovering the joy of listening to a radio and some like to keep the memories alive of their forefathers, says Moinuddin.

Md. Moinuddin’s shops have shelves crammed with old radios and spare parts sourced from all across the world. People today boast of podcasts, cell phones, and car music systems to listen to music but a radio set which was a must in many households in India is now scarce and unheard of. But this one last repair store still existing in Hyderabad springs to life every morning to cater to the need for this scarce commodity.

Recalling the good old days Md. Moinuddin says his Father Sheikh Mahboob had opened a shop in the early 1900s in Dabeerpura for water pipes which was a rarity and a novelty then When the Nizam build these new shops Sheikh Mahboob who used to retail taps and pipes from Bombay then and now Mumbai, shifted his shop to the busiest market places in the city, Chatta Bazaar near Charminar which continues till date. Sheikh Mahboob had bought the two-story shop for Rs. 7000. Sheikh Mahboob’s fortuitous visit to buy pipes and taps from Mumbai led Sheikh Mahboob to see a new artifact the radio. The dealer told him to take this to Hyderabad and sell it and if it does not sell to return it to him. Sheikh Mahboob for the first time got a radio to Hyderabad at around Rs. 150 or so. A house could be purchased between Rs. 500 to 400 he recalled. Getting nostalgic he recalled that even a Hundred Rupee note was so big that it had to be folded four times to be kept in the pocket. However, the Radio did not operate in Hyderabad as there were only 110 volts of electricity against the 230 volts required for the radio. Sheikh Mahboob took back the radio got it set to 110 volts and came back.

Md. Moinuddin said that in those days only Voice of America was broadcasted Most of the time Dictator of Germany Adolf Hitler’s speeches used to get broadcast and people in large numbers thronged his shop to hear the speeches. In those days there was only a single transmission and that was Longwave. Shortwave and Medium waves came in much later. 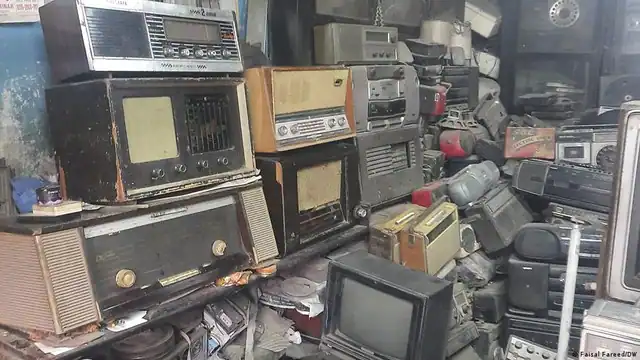 A Nawab got interested in the radio and purchased it at Rs. 290 double the price at what it was bought. Then slowly many radio shops opened in the city. The Nawab’s son–in–law learned the art of radio repairing and mentored them. He mastered the art from Russia and was the first mechanic in Hyderabad for radios. Later this mechanic put up an institute at Gowliguda Chaman in Hyderabad. But for Sheikh Mahboob there was no looking back his business was roaring with success. In 1997 Sheikh Mahboob died leaving the shop to his two sons.

Earlier Radio was operated through electricity but later a battery radio started. The battery which was available at Rs. 9 then was not a chargeable one and had to be replaced every three months. Despite the price people were willing to pay for the battery as radio had become a fad. But with the advent of Gramophones, tape recorders, spools, and radio became fossilized.

Today his workshop has shelves crammed with antique radios and spare parts and the motor continues to clunk, and rattle when he repairs them or solders the fine components. It’s not easy to repair. Often, he has to disassemble, clean, regress, and reassembles the parts, which is quite a complex business. In many cases they need to be replaced and finding a replacement is not easy, says Md. Moinuddin who now runs the shop all by himself as his brother too passed away. Often, he has to even fabricate parts too.

In one of the corners of the shop lies a GEC radio which dates back to the early 1900s. This radio set was bought by my father, he points out and says ‘We have a radio set of Radio Corporation of America, in our home “. People come from Saudi Arabia, Dubai, London, and Kuwait they all bring their old radio sets for repairing. In India we are the only repairing shop that can repair valve amplifier radio set, he claims. We have sets of 4 volts and 6-volt valves. Even though transistor came and valve amplifier had stopped people continue to have valve radio sets and till date bring their radio sets to us for repair”, he adds.

A lot of audiophiles continue to visit his workshop for repair. “Marconi”, they believe, provides them a full-fidelity listening experience with incomparable richness of sound. But sometimes people do buy radios as a mere decorative item, to add to their heirloom.