BHOPAL:  Madhya Pradesh Chief Minister Kamal Nath has ordered a probe into a case of assault against family members of an Indo-Tibetan Border Police soldier, after he threatened to become a rebel in an online post.
Havaldar Amit Singh had alleged inaction by authorities and said he would become the next Paan Singh Tomar, a notorious soldier-turned-athlete-turned-rebel, if those responsible for the assault were not punished. His siblings were allegedly attacked by security guards at a popular tourist spot in Madhya Pradesh’s Khandwa district. The soldier said that one of his brothers lost 80 per cent vision in his right eye in the assault while another fractured his leg.
Mr Nath took notice of the post and directed the district administration to carry out an independent investigation into the matter and to ensure that no action is taken against the innocent, an official in the Chief Minister’s Office told reporters.

“There will be no injustice with anyone in my government and neither will injustice get any kind of protection. All proceedings should be carried out only after a fair probe,” Mr Nath said in a statement.

The Chief Minister told the soldier not to worry, and said that providing security to his family and every other citizen of the state is his government’s duty, the official said.

A senior police officer said the matter would be re-investigated as per the directives of the Chief Minister. “Cases were registered earlier on the complaints of both sides (Amit Singh’s family members and security guards),” the officer was quoted as saying by news agency PTI. “Further action would be taken if new facts emerge during probe,” he said.

Soon after the announcement of a fresh probe, Havaldar Amit Singh, in another Facebook post, thanked Kamal Nath.

“I have just been told that after media reports of the assault against my family members, Madhya Pradesh Chief Minister has taken cognizance of the incident. He has told the district collector to ensure a fair probe. I am sure that the chief minister will not allow injustice to happen and will provide us help. I wholeheartedly thank him,” Amit Singh said. 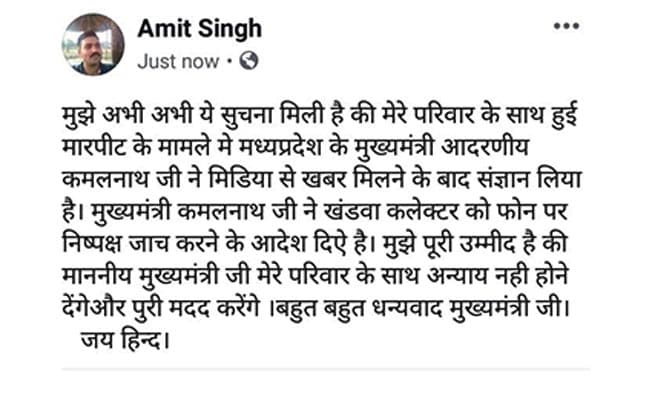 On August 16, three of Amit Singh’s brothers, two sisters and their five kids, including two infants, went for a picnic at a tourist spot on Hanuwantiya Island in Madhya Pradesh’s Khandwa district. They got into an argument with the private security guards who didn’t allow them to carry milk bottles and biscuits for the infants.

The argument soon escalated into a physical altercation, the soldier said, and the guards along with boatmen at the island attacked the family, including the women and kids with bricks, sticks and even beer bottles.

Police filed cases against both, the security guards, and the family members.

Qatar cozies up to Israel, again

An 85-year-old woman was burnt to death in her home in...