A Mumbai based Sufi Muslim body submitted a letter to Maharashtra Chief Minister Uddhav Thackeray appealing him to pass a resolution against the “draconian” CAA and NRC in the state Assembly. Raza Academy, a Sufi organisation that promotes Islamic beliefs through publications and research, said that Maharashtra should follow Kerala and Punjab’s lead against the “unconstitutional Act passed by the BJP government”.

The letter dated January 22 and signed by the academy’s general secretary M Saeed Noori stated, “On behalf of the entire Muslim community and secular-minded citizens of Maharashtra, we the Ulamas and Islamic scholars hereby request your good self to kindly pass a resolution denouncing the draconian and unconstitutional Act passed by the BJP government which has been opposed in an unprecedented manner not only in India but throughout the world.”

The organisation also said that the Uddhav government has led to a “positive atmosphere” in the state which has economically, socially and politically benefitted all communities.”Your firm grip and bold initiative against the central government has brought cheers in the hearts of Maharashtrians,” Raza Academy wrote to Uddhav Thackeray, adding that they see in him his father Balasaheb Thackeray who “tackles mighty opponents” and bring them and their corrupt practices to its knees.

In the end, Raza Academy stated that CM Uddhav Thackeray will be a “part of history” in opposing the CAA and NRC and will be remembered for it. 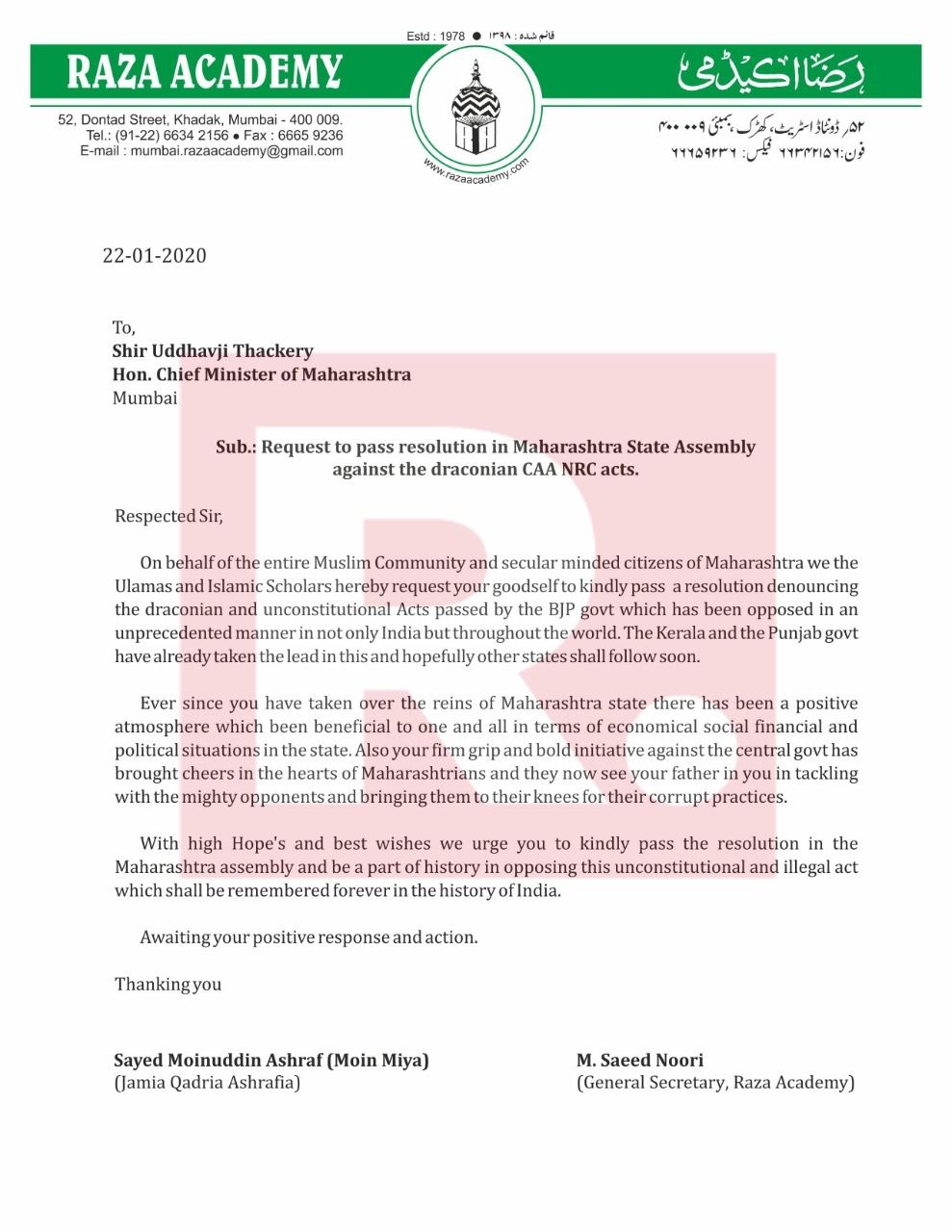 Raza Academy was part of the delegation that met CM Uddhav Thackeray at the Mumbai Police Commissioner’s office in south Mumbai on Wednesday afternoon. Thackeray sought to assuage concerns of the Muslim community over the new citizenship law and likely NRC. The CM, however, didn’t give any assurance to a delegation of Muslim scholars and clergies on their demand to bring a resolution in the state Legislative Assembly against the CAA on the lines of Kerala and Punjab.

Chinese envoy steps in to save PM Oli govt, her office...

US violated UN Charter with drone strike on Soleimani – UN...