Tension between the rivals has the potential to hurt investments & sour business sentiment.

India’s economy slowed considerably with little signs of a quick recovery, as political tensions with neighboring Pakistan emerged as a new risk alongside the familiar global headwinds and tighter domestic financial conditions.

Simmering tensions between the nuclear-armed rivals has the potential to hurt foreign investments and sour business sentiment, besides making local assets and the rupee unappealing. That will likely be a drag on economic growth, which slowed to the weakest pace in five quarters in the quarter ended December.

Relations with Pakistan soured after India accused the neighbor of being responsible for a major terrorist attack in Kashmir and the two engaged in tit-for-tat airstrikes. For now, Pakistan struck a conciliatory tone by offering to release a captured Indian pilot.

“This comes at a tricky time for both sides, as India heads into the general elections in April-May 2019, while Pakistan is in a tenuous economic position,” said Radhika Rao, economist at DBS Bank Ltd. in Singapore. Tensions are likely to overshadow the growth data, she added. 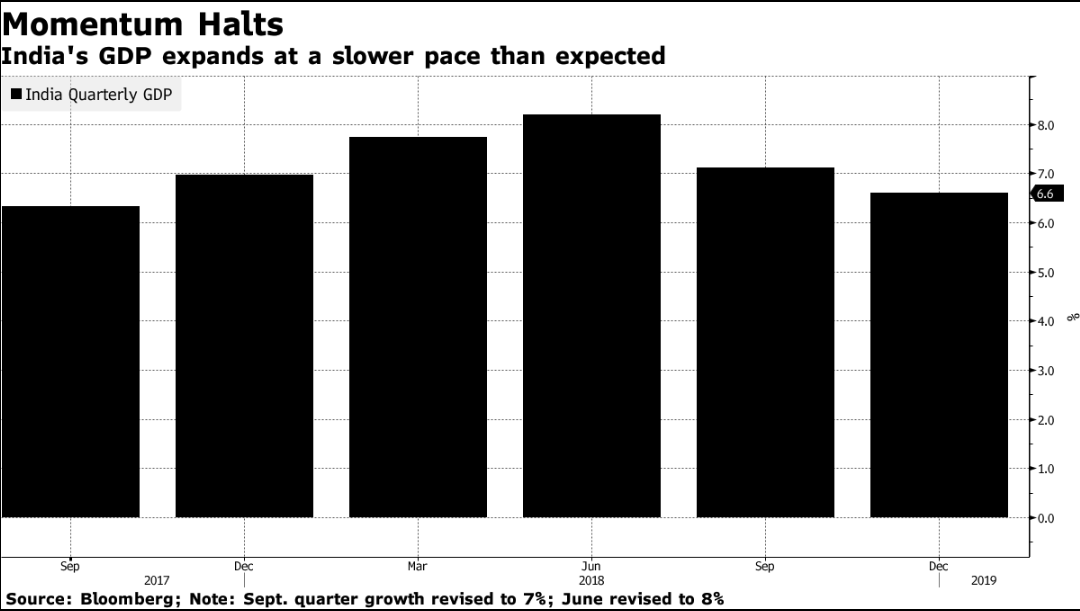 Data on Thursday showed gross domestic product rose 6.6 percent in the three months to December from a year ago. That compares with the median estimate of 6.7 percent in a Bloomberg survey and a revised 7 percent in July-September.

Waning consumer demand dampened momentum in the economy where domestic spending makes up about two-thirds of GDP. Slower global growth also weighed on activity, which will give the Reserve Bank of India, under new Governor Shaktikanta Das, more reason to ease monetary policy after it unexpectedly lowered interest rates this month.

Lid on Inflation
Benign inflation gives policy makers the room to do so. Consumer price inflation is at around 2 percent, and core inflation — that strips out volatile food and fuel articles — has also begun to dive. The measures are seen converging in coming months as the economy shows more signs of a slowdown. The RBI targets headline inflation at 4 percent.

For the past two quarters, domestic passenger vehicle sales growth, which is an indicator of urban demand, has slowed down. While cement production — a measure of construction activity — moderated slightly, purchasing managers’ indices show activity in the dominant services sector has been cooling.

“This further reveals that both consumption and investment demand has been slowing down in the economy,” said Soumya Kanti Ghosh, chief economic advisor at State Bank of India.

Add to that, the government has cut back on capital expenditure in its latest budget to curb the fiscal deficit. That’s led economists to foresee more sluggishness.

“The slackness in government capital expenditure ahead of elections tends to have a lagged impact, affecting growth in the following quarters,” said Teresa John, economist at Nirmal Bang Equities India Pvt Ltd.

Is Emirati G42’s deal with Israeli defence about Covid-19 or surveillance?

3 demands that likely got Sachin Pilot axed out of Rajasthan...

‘Truth can be rattled, not defeated’: Sachin Pilot after being removed...

Iran executes CIA spy; another agent of US, Israel on death...